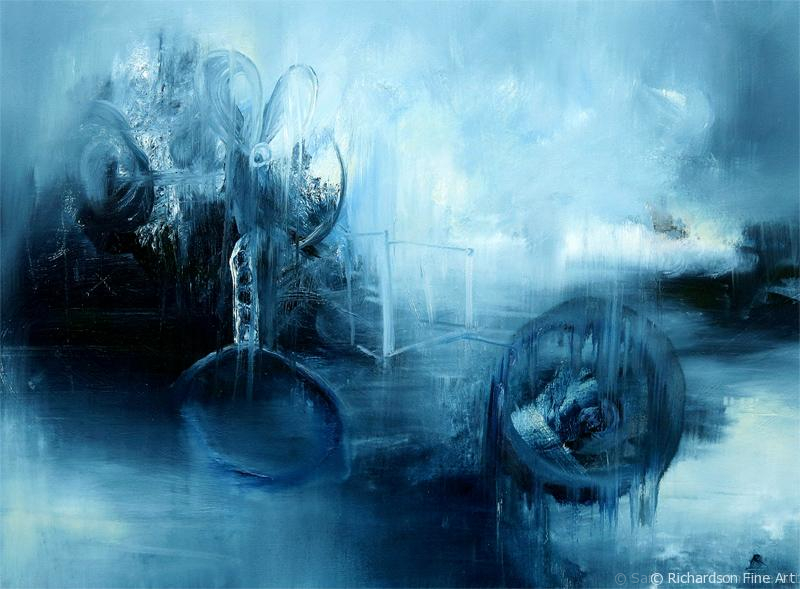 Indigo Blue and a Monotone Palette

If you have been keeping up with the studio for the past few months you may have noticed the appearance of the Eumenides Series – a group of works with a predominately blue color palette. The series originally began by making connections to my black and white landscape paintings. Over time, the work leapt from exploring different land compositions to introducing subtle and not-so-subtle representational elements. The story has begun to shift.

In a prior article, I wrote about how the Eumenides Series directly relates to a time period around The Furies being renamed to The Eumenides. I responded in the paintings to the questions I have about the why’s and how’s surrounding the renaming. Where did all their power go? What happened to their fury? There is a lot of calculated upheaval compositionally in the work that creates beautiful chaos and reflects my pile of questions.

A Kindly Ones Protest

I began to draw with different tools and mediums on the oil paper and combined the energy of the land with natural elements and objects. The effect is somewhat dreamy but in an charged Furies kind of way. I have been thinking a lot about what that would look like…The Furies dubbed Eumendies (but come on, they’re still The Furies!) manifesting as non-human biological entities. A Force but not The Force. An organic uprising or revolution with an intense reaction to the modern world. A ‘kindly ones’ protest.

You can see more work from the series on Facebook, Saatchi Art and direct from the studio. This series will continue to grow and I hope you will be a part of it.

Do you have questions about this series or are you interested in purchasing work from the studio? Please send a message to studio.